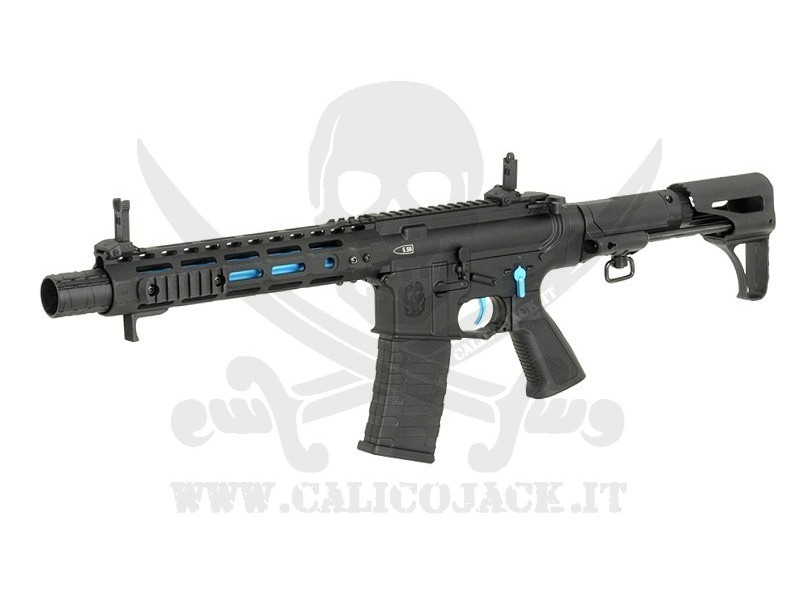 In this new ASR122, The iconic ghost face logo was engraved on the lower receiver and dust cover, which makes the gun looks creepy and spooky. The gun itself was black but some parts are blue, for example, outer barrel, trigger and fire selector, those represent a departed spirits or deceased soul, so called “Blue Flame" you saw in the dark.

ASR122 is using a new 10" Evo Tech M-Lok Hand Guard. M-LOK stand for Modular Locking system, it is a firearms accessory mounting system developed by Magpul Industries that allows for direct attachment to negative space mounting points. Unlike other traditional hand guard comes with a full picatinny rail on the top, ASR122 use a slim profile hand guard, only short picatinny rail sections positioned along the top at the front and rear, middles are trimmed and replaced with M-Lok Slot. These make the hand guard more light weighted and easier to grip during battle.

CRS butt stock is a telescoping stock being used in this rifle. With a press of a button underneath, the rapid deployment system instantly springs to the extended position for user. A sloping cheek weld to provide consistent and comfort in any 4 positions.

This rifle comes with Phantom flip up front and rear sight. They are mounted on a Mil-STD 1913 Picatinny Rail. This gun standard comes with Phantom Overload Grip, which has shock absorption deign in the interior that reduce the vibration generated from the start up of the motor, thus relatively improve the motor performance and significantly reduce the battery loading to 10.5 Ampere.

30 other products in the same category: